The World Economic Forum (WEF) is meeting this week in Davos, Switzerland. The annual conference has a long history of bringing leading individuals from the worlds of business, government and academia together. Following criticism and protest in the 1990s and early 2000s, the annual meeting has also been opened up to ‘civil society’ and webcasts now enable the interested public to peek into the proceedings of the once very secretive meeting.

The WEF prides itself on being an ‘agenda setter’ and bringing the ‘international community’ together to tackle common global problems. This international community is broadly conceived and now takes in key multinationals, international NGOs, international organisations and the leaders and senior politicians of leading states, as well as senior academics from across the social and natural sciences. To illustrate this point, the Co-Chairs of this year’s meeting included Winnie Byanyima (Executive Director of Oxfam International), Jim Yong Kim (Director of the World Bank) and Eric Schmidt (Chief Exec of Google). Many hundreds of participants from these sectors will be present at the meeting and contribute to the discussions.

The conference theme this year is ‘the New Global Context’ and is underpinned by four pillars. These include the challenges associated with maintaining global cooperation in the context of geo-political shift and ‘decentred globalism’; the challenge posed by slow growth and the need to make this more sustainable and resilient; the promises and challenges of new technology; and social instability. 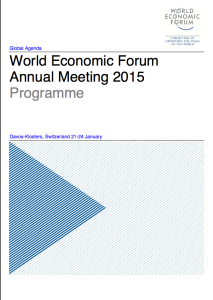 Something of a ‘pinch of salt’ is needed when decoding some of this: it suits the forum organisers to present significant systemic challenges as requiring imminent attention, because that suggests a stronger purpose for the forum. However, the agenda does highlight some significant risks facing the global system, and which it has a track record of outlining, particularly in its Global Risks Report, the tenth annual iteration of which was published last week. 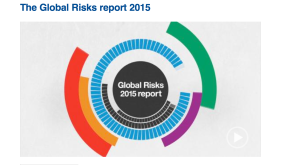 In the paper, I argue that a world society is emergent, but this is better understood as a ‘world market society’ (WMS) in which the process of world market integration is ‘ecologically dominant’ (to borrow a phrase from Bob Jessop) over other aspects of it, such as increased social connectivity, the development of shared cosmopolitan identities and the extension of democracy and human rights.

I also argue that if a WMS is emergent,  it also has some important institutional promoters – these being supra-national institutions such as the World Economic Forum, but also inter-governmental organisations like the World Bank, International Monetary Fund (IMF) and Organisation for Economic Cooperation and Development (OECD). These organisations have a long track record in promoting world market integration. But the same organisations are also now increasingly engaged in identifying risks to the continued process of world market integration and attempting to manage these.

For the many activists and critics who have traditionally viewed these organisations negatively (for e.g. the anti-globalisation movements of the late 1990s and early 2000s, the Occupy protestors and the like), this can be superficially confusing. For one of the major themes in work put out by the WEF, the OECD and the IMF over recent years has been to lament the world wide rise in inequality and its now widely recognised negative impacts on growth, social stability and the vulnerability of the financial system.

My paper charts the various research and strategy reports put out by these organisations over the last few years which make these arguments. It also reports on interviews undertaken with senior figures at the OECD and IMF in the last few months about their work on inequality. The tenor of these interviews was that these high profile reports on inequality should be taken at face value; they represent a serious concern with the growth of inequality.

The answer lies in ‘risk management’, and by understanding risk in a dynamic way. As Paul Cammack  argues, risk management to these organisations is about seeing risk as both positive and negative. Risks are positive when they are about pro-market behaviour – rewarding investments in skills or product development. Risks are negative when they corrupt market behaviour. 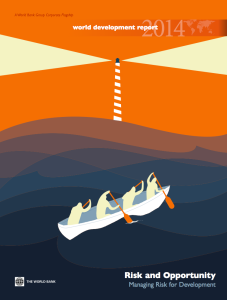 WDR 2014 Risk & Opportunity. The cover image for this report was in bad taste given it was published only days after the Lampedussa boat sinking.

In this sense prominent negative risks are climate change or natural disasters because they undermine confidence in market-based risk taking and lead to market failure. As if to reinforce Cammack’s point, the World Bank’s annual World Development Report in 2014 was titled Risk and Opportunity and much of it was focused on how to incentivise positive risk and contain negative risk.

Inequality can be understood in this way too. Inequality is seen by these organisations as positive when it leads to disproportionate rewards for some, and therefore incentivises market-based risk. However, there is a level of inequality when the costs of negative risks outweigh these positive ones. This is the case where inequality leads to social and political instability or undermines trust in political institutions and the status quo of uneven wealth and power distribution.

To cite an example from a recent OECD report, it is also negative when it undermines market based risk taking: for instance when unequal societies mean that the poor do not invest in their skills development for future reward, because they cannot forgo today’s consumption, or they see the potential benefits as too uncertain. Clearly, in the judgement of those responding to the WEF’s Global Risk survey in recent years, and the OECD and IMF, inequality has risen to a level when these negative risks are now outweighing the positive ones.

The argument underpinning my paper is then that the new concern among international organisations with inequality – what might be termed a ’New Global Politics of Inequality’ – is just one example of their role in managing the risks associated with world market integration. It is a genuine concern, but it is not necessarily progressive. Rather it should be seen as a feature of these organisations attempting to save World Market Society from its own in-built crisis pressures.

None of this is to question the individual motivations of some of the committed people that I spoke to about their work on inequality inside these organisations. Many of them were genuinely committed and from a progressive desire for a more equal distribution of power and resources. They reported long-standing commitments and work in the area of inequality which stretched far beyond the recent organisational support for it. However, what seemed clear was that their work and ideas were allowed to come to the fore, and given organisational prominence, precisely because the context had changed. From an organisational standpoint, inequality had moved between the categories of positive and negative risk. 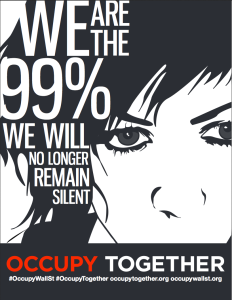 There are many reasons why this shift in organisational perspective occurred. On the one hand protest and activism was significant. The Occupy movement, resistance in Southern Europe to the imposition of austerity and the Arab Spring were all major triggers for shifting organisational agendas. So too is the increasing uncertainty among international organisations about their leadership and facilitation of the international community in a world of geo-political power shift from the US and ‘West’ to a multi-polar world. Dealing with inequality and social fragmentation as well as the impacts of this on consumer demand and environmental problems like resource depletion and climate change, in the context of reduced leadership capacity worries these organisations greatly. Watching the webcasts of discussions at Davos reaffirms this conclusion substantively.

A final question relates to the role of advocacy in this context. A future avenue for my research, and one currently being explored in our Global Inequalities research group by doctoral researcher Priyan Senevirantne, is what role leading NGOs are playing in this process?

Oxfam has been one of the loudest critics of increasing inequality, and no doubt has been influential in putting the issue on the agenda of the institutions of world market society. Oxfam’s critique is that WMS is skewed toward the very rich. Its analysis is far more radical than that of the IMF or OECD because it clearly suggests that there is something inherently wrong with the WMS itself.

However, by engaging with the WEF process as an insider, surely Oxfam risks becoming a part of the WMS: that is part of the very problem it is seeking to address. Priyan’s research suggests that many international NGOs – not necessarily Oxfam – are indeed becoming central elements of the very system that they were established to change. Other excellent research even suggests that protest itself is becoming a commercial proposition and stripped of its radical and system-changing objectives. A natural extension of my ISA paper would then be to explore the way in which Oxfam and other similar organisations engage with the institutions of the WMS and the effect that this has on the radicalism and progressiveness of their objectives. Watch this space.

A Specialist Group of the Political Studies Association, United Kingdom

Welcome to the Inequality and Social Justice Research Group, University of Derby

This WordPress.com site is the cat’s pajamas